We are living in strange times and 2020 has definitely been the strangest year yet.

The last decade has seen some real extremes in this country, from the highs of sports events like the 2012 Olympics & Cricket World Cup, to the political lows of the Credit Crunch & Brexit. People have been brought together and fallen apart, but I don’t think any of us were prepared for what we are going through now.

The last week alone has seen travel bans, curfews, self-isolation and sadly there will still be more to come. It is times like this when you just want to spend time with your loved ones, but in many cases even that is not even possible at the moment. For me personally things are very different this year, with a new baby to look after and family members to worry about. Sport should not have even entered the equation, but for some reason it did.

For many people sport is of course a luxury, a hobby, and low down the list of important things. Most UK sports events in the coming months have now been cancelled, including International Rugby, Cricket, and even football (you know it must be bad when the footie is off). Sure, we can do with a break from sport for a while, although for many it is a big part of their lives – something to get excited about, something to escape with, something to guide your social activities. There was a great piece on BBC News this week on this and I know exactly what they are getting at. 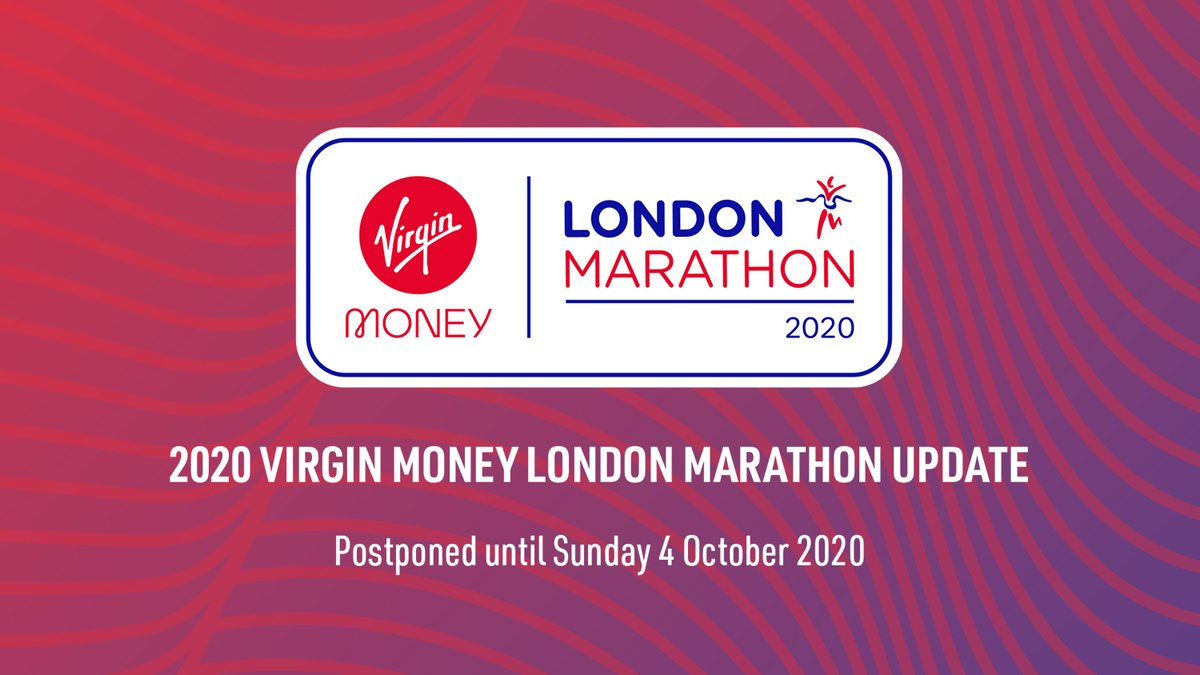 This of course brings me onto the postponement of the London Marathon, the driving force behind restarting this website. For many runners it is the pinnacle of their career, ad it is with true British irony that after a decade of trying to get a place in the darn thing, the year I finally manage it and the world turns upside down!

For the first week of March as the news started spiraling and Covid reached Europe I wondered if it might even affect the race – hoping this might come and go by the end of the month like many other stories, forgotten moments later – but clearly things were different as other races, events and matches began to be cancelled by the day.

Lots of questions, both selfish and practical: If the Marathon is cancelled will they honour my place next year? Could they really reschedule such a complex closed roads event? What about the funds I had raised so far? How long could I maintain my running fitness? What about the hotel I had booked before and after?

By the time the inevitable announcement came it was actually a massive relief. The race was still taking place but postponed until October. I would keep my place, and have the luxury of summer training to look forward to (more irony after months of cold, wet training through winter!). I even managed to defer my hotel say until the new race weekend.

It feels like a massive weight had been lifted. Having waited all this time, I can manage another few months waiting. Clearly there will be a lot of disappointed athletes, who maybe cant make the new date or cannot cancel their travel plans as easilly, but ultimately you have to look at the positives. The actions now will reduce pressure on the health service and ultimately save lives, and with luck the crowds will be back in full strength again by the Autumn, ensuring that special atmosphere everyone wants for the this race. And hey, how many people will get to say they took part in the only London Marathon to have ever taken place in October…

Even better, you lucky readers will get an extra six months of these ramblings to read in the meantime!

When I talk to many people about my various challenges and longer distance events, at some point the conversation will usually get around to the topic of training. As much as I would love to claim to run hundreds of miles each month or smash through 4am gym sessions the truth is somewhat less exciting: I train 3 or 4 times per week, usually for about an hour, majority cardio, and whilst I do step it up as I get closer to the big day there is only so much time in the week with a full time job (and 9 month old baby!).

When I first started out my training was very gym based, with a big focus on spin and circuit based classes and only occasional outdoor stuff. It was only when I started working away and wanted to escape the monotony of chain hotels that I even got into running. To be fair though it all worked, seeing me through three 70.3 Ironmen, two 100 mile cycle sportives, one marathon and a whole load of obstacle races, half marathons and so on.

The common denominator of all those races though, is they took place during Summer or early Autumn, which has meant for most of the last 6 or 7 years I have been able to take it steady from around October to March, keeping my base fitness through Winter with nice cosy indoor gym sessions, before starting to step things up as the time the clocks Spring forward and the temperatures start rising, in time for my A-race.

Everything has changed this year with the London Marathon, an event not only terrifying in its distance (which I know I can do) but in its timing – April! This has truly forced me out of my comfort zone as I actually have to train properly through the Winter, increasing my weekly mileage throughout December, January and February. Believe me, getting around 26 miles is a big part of the sponsorship, but it is those three to six months before that you really earn the contributions and show your commitment.

Where once I used to smile inwardly at the ice cold January joggers, shuffling down the pavements in their shiny New Year’s resolution kit, as I drove past for another high energy class in my cosy warm gym, I am now the one hobbling down the high street in the fog, dodging the tidal waves as cars take turns to try and splash me with any available puddles. Yes, I am now a Winter runner.

To be fair there are some benefits of Winter running. When you get the right day, the sky can be even clearer than Summer, you have the roads to yourself, and the chills act as natural motivation to run faster and stave off hypothermia. But get the wrong day, or worse one which starts out looking alright and tricks you into running miles from home before unleashing a months worth of rain in half an hour… but back to the positives!

First up is the kit, which admit it or not, is always a massive draw for anyone who likes to work out in the cold dark evenings – and don’t the manufacturers know it. Layers of long sleeved, sweatproof, fast wicking tops just look cool, and the best ones even have those thumb holes in the sleeve so you can use them as a sort of weird glove thing. As a bonus they usually come in a range of 90’s dayglow colours which stand out in the dark, making you look like a high speed version of Ross’s teeth (for older readers think Cheshire cat)!

Then there are the leggings, a top look for any modern man, and one I rock hard, at nighttime anyway as they tend look a bit tight on my rugby player legs. Still, they keep you a lot warmer than shorts, as I have found to my cost in the past with bright red legs and icicle toes. I also usually run in my trail shoes at night, mainly to protect my precious road trainers from all that mud that accumulates on the local roads that you can’t see in the dark…

…or so I thought until I invested in an even ‘cooler’ piece of kit. That’s right I actually went and bought what used to be described as a miner’s lamp but is now cunningly re-branded as a runner’s head torch, ensuring my runs through the park now look to the casual observer like some sort of illegal teenage rave is going on, meaning it is only a matter of time before I get chased by the 5-0. Until they see my skintight leggings up close and let me go as the fall over laughing.

But as usual it will be me who has the last laugh , as I can really tell the difference this year having done all this extra Winter training in the last few months. Not only will it make sure I am ready for London but give me a head start on any other events I do later on in the year: maybe even a new PB. Who needs Summer?!